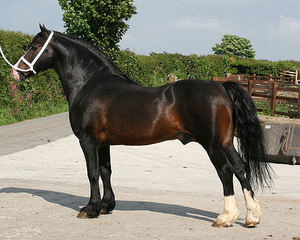 Tireve Welsh Flyer has returned from his overseas stud duties and has spent the early part of 2012 at the Gobell Stud, but will be returning to Pennal shortly.
He was fully booked for 2012. His tremendous bloodlines coupled with a superb tail set, movement and temperament made Tireve Welsh Flyer an excellent choice for the 2008 season which resulted in three fillies for the three mares he covered at Pennal.